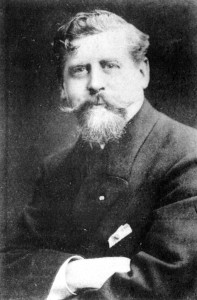 Arnould Galopin was born in 1863 in Marboeuf, in the Eure department, where his father then worked as a schoolteacher.

He started his studies in the Lycée Corneille, in Rouen, and finished them in Paris where his family had later settled.

After his military service, he became an assistant teacher ; he then worked as a journalist for about a decade, mainly for two newspapers : La Nation and Le Soir.

After that, he considered writing and, in 1903, he published his first book called Les enracinés. At the same time, he started his first serial in La Vie Populaire. It was a swashbuckler called L’espionne du Cardinal.

He carried on with La Petite Loute, a sentimental story and then he took over from Henry de la Vaulx to write the instalments of Cent mille Lieues dans les Airs.

Le Docteur Omega appeared in 1906 in the magazine Mon Beau Livre. It was a success and Arnould Galopin was nicknamed « The Modern Jules Verne ».

From then on, he published book after book without a break and, for thirty years, Arnould Galopin lived « adventure on a daily basis » for the greatest pleasure of his readers, teenagers as well as grown-ups.

Many of his novels appeared in series in Le Journal and Le Petit journal, two daily newspapers of the time with high circulation figures.

After working for the publishers Fayard and Taillander, he joined Albin Michel with whom, during all his lifetime, he maintened confident and warm friendly relations.

Galopin, who wrote about a hundred books, tried all sorts of genres : historical, maritime, futuristic, sentimental, detective as well as adventure.
In his works, children had a great importance since he offered them 2500 installments corresponding to 28000 pages of adventures of all kinds.

In December 1934, Arnould Galopin suddenly died, thus putting an end to a popular literary production in which he tried to instill good humour and entertainment in a simple but elegant style.